In short: fuck electric scooters, electric bikes as well as any other similar things that are electric but not an EUC, nor a car. Maybe unless you need to pull a trailer:

Or transport a big computer over NYC.

Someone named letoram said in a place named #lobsters that electric unicycles are fun, and that they feel like you’re about to fall at any time, which got me curious and deserved some experimentation. For my first wheel, I had no idea what to look for and just bought the S2 since it was cheap-ish, and no one told me not to.

It took a while to get the gist of the controls, but on my second day I could already drive around somewhat well and…​ pinched my inner tube when hitting the border of a pavement. Then I had to order some tools, dismantle the whole wheel, and learn how to repair bike tyres on hard mode. (I assembled it wrong the first time, pinching a cable—​just fixing this took me about an hour.)

Very shortly this wheel has become too underpowered for me, even though I’m fairly light and the motor can take me up some surprisingly steep slopes, if barely.

If you need a charging/storage stand, cut the cardboard box it came in to fit just the lower block of polystyrene foam. Works pretty well, just beware of free spinning, that’ll do some damage to it. 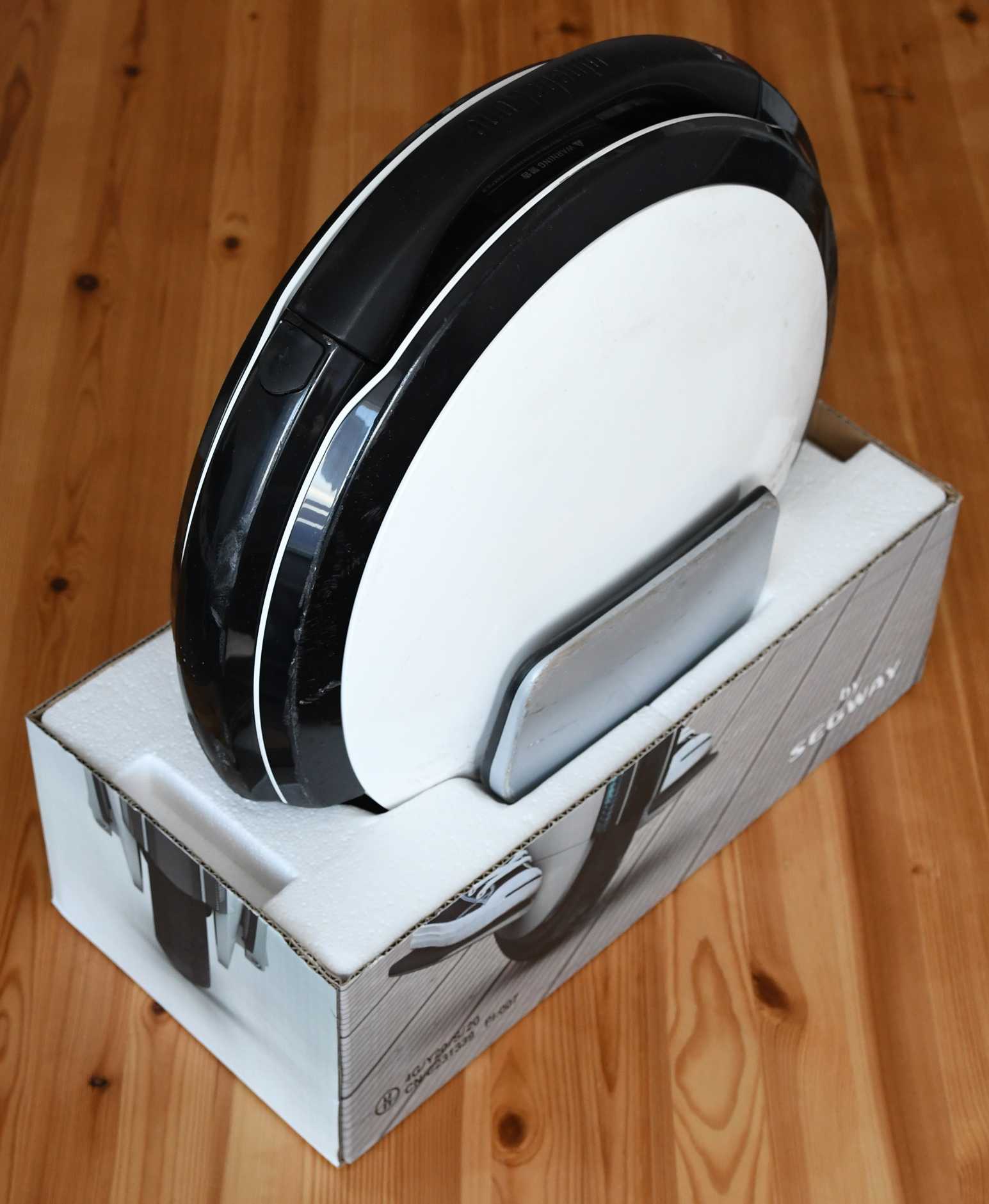 In a few days of actual practice, you’ll be almost literally flying around, with ease. It feels amazing. It can also be a decent leg exercise, especially at the beginning, when you try to use the wrong muscles. Despite my fears, my sometimes aching knees don’t seem to mind, almost to the contrary. But feet like to hurt, and you can easily get cramps. Good shoes help.

Learn on a hard surface, and remember that it’s more stable when it’s moving. It helped me to imagine that I’m getting on a skateboard.

It doesn’t take much effort to learn to drive on one leg only—​you do this anyway when getting on, so just keep prolonging the duration—​it’s just physically demanding, and hurts after a while.

Jumping down curbs is fairly safe but requires some practice. See also the list of S2 negatives above. Shallow and sloped curbs can more or less be simply driven through. Ideally, find a nearby skate park to train your balance. I was quite surprised by the slopes I could easily go up and down.

Driving backwards seems doable, but my progress with it has been slow so far.

As a follow-up machine, I first considered the powerful and sturdily built Veteran Sherman, but eventually fell in love in the idea of a city-friendly commuter wheel that is InMotion V11. Seeing as a V11F was unlikely to appear anytime soon, and that I felt ready to drive faster than 24 kph, I bit the bullet, ordering this pricey monster of a wheel.

At 27 kilograms, just extracting it from its box was quite difficult. All of its shock absorbers were empty, so I had to pump them up, disassembling the shell in the process. The attached air pump could be better, but it does its job. Given how little I weigh, it was slightly easier for me to pressurize the bottom shocks accurately with a regular, low-pressure pump. It couldn’t make a good seal with the tiny upper chambers, however.

The riding experience is very different. Whereas the 14" S2 is nimble, this 18" tank just wants to go straight ahead, and pedals are positioned so high that getting on requires a lot of getting used to (I still can’t do it reliably). Accelerating or decelerating is by no means easy either, as you need to pinch the wheel between your legs for leverage, and put in considerable effort—​otherwise you simply won’t extract the full power. It seems that one has to install some power pads, sooner or later.

Overall, the V11 simply isn’t made for the pavement. Which leaves me with two other options: trail paths, and public roads. Since I strongly prefer concrete over nature (yuck, spider webs and stones), and don’t feel comfortable in traffic yet, I went for exercising the ridiculous range of my device on the road, at night. 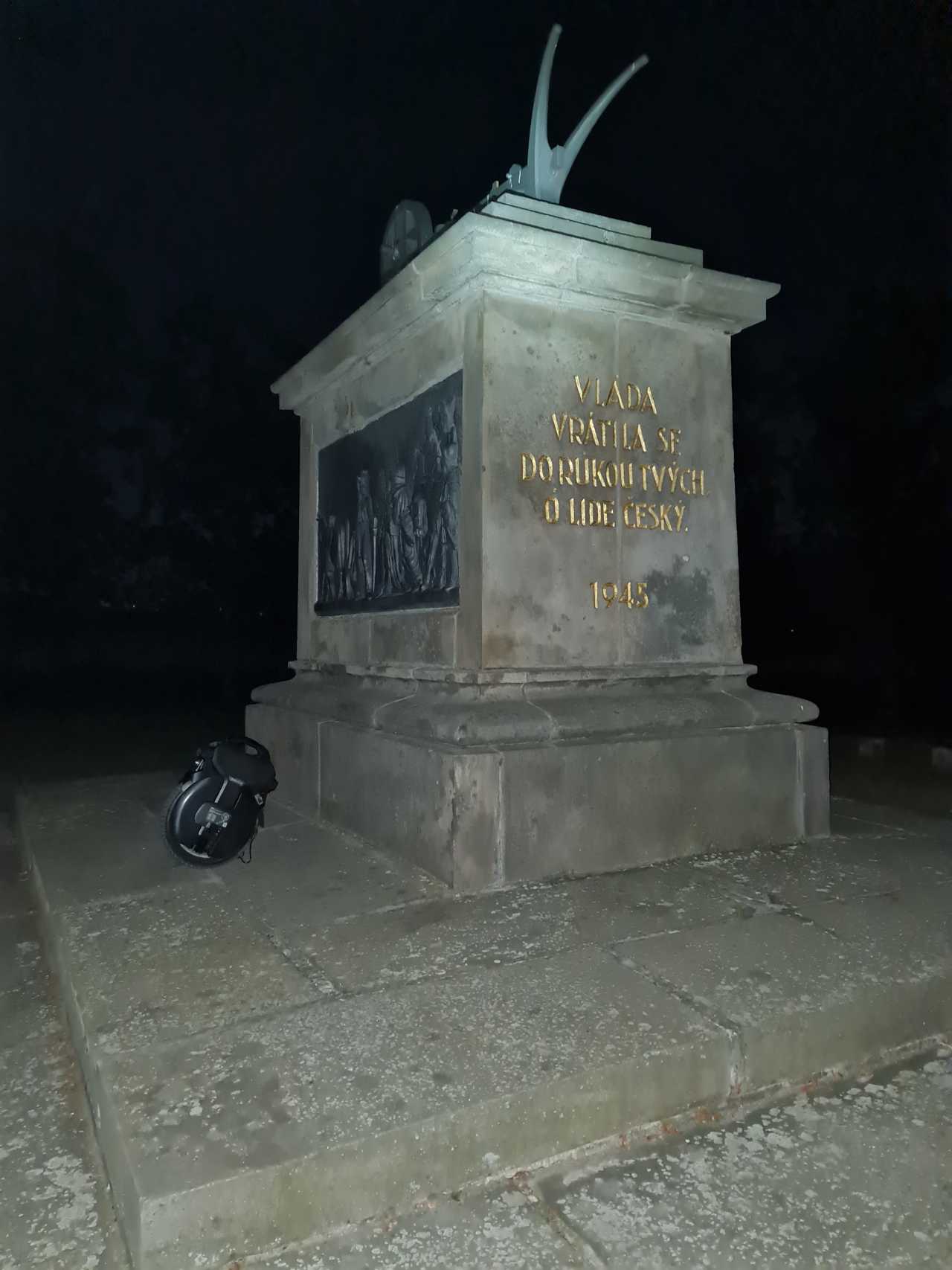 Which turns out to be great. With virtually no cars around, I rarely need to stop to give way, and I can afford to drive in the centre of the lane most of the time. In a short while, I ended up increasing the wheel’s speed warning to around 45 kph, often getting close to that speed around town—​and without fearing for my life. The air suspension takes care of potholes and bumps rather well. When I get the occasional wobbles, I slow down, shift my position, maybe carve for a bit, and it tends to go away. Interestingly enough, I only get sore groin, though there’s certainly some overall leg fatigue, too. Generally speaking, I have a ball.

Okay, I admit there was an accident where I ended up running right into a random, unexpected kerb. Luckily, I could simply switch to walking at that time, and the wheel bounced off into grass. I’ve learnt to always look ahead, as well as to not blindly trust unknown paths.[1]

I’ve also realized whom those ‘rut warning’ roadsigns are for—​some paths can be quite dangerous in this regard. You don’t want to have anyone overtaking you just as you’re trying to avoid a different kind of disaster, so you need to recognize ruts from a distance, and carefully drive around them without suddenly changing direction. Or take the whole lane for yourself, and go fast enough to not be overly annoying. Or have a thick skin, whatever.

Finally discovering where EUCs shine, I started looking for more distant targets. Only to find that I could barely see that far, because my V11 didn’t shine enough. It isn’t just about unlit intercity roads—​you can’t even see where you’re turning with these vehicles, seeing as they beam in the wrong direction entirely for a moment.

Fortunately, I’m a double Convoy S2+ owner, which can be had on Aliexpress. My summary is:

In either case, I have found that the fewer modes it has, the better. Otherwise you end up having to cycle through bullshit. Biscotti’s ‘config mode’ is similarly a nuisance, since it’s entered way too easily. I usually don’t have any time to think about such nonsense.

This happened in the daytime. I don’t remember a lot from the few important seconds, but I think I was going too fast in an unfamiliar area, and a bump in the road threw me up in the air. In a haphazard manner, I fell forwards. And so I got to test my equipment:

Now onto what I should have worn, but didn’t:

It could be worse. The V11’s frame got broken, but I could drive back home on it. Which brings me to one lesson I’ve reaffirmed: assume it’s worse than what it seems like, and limit all movement until you know the real extent of your damage. It takes the body about a day to let you know. Essentially nothing hurt initially, I just felt things being a bit wrong.

I wonder if jump pads would have helped in this situation.

The machine is fairly repair-friendly, if heavy to handle. Everything is held together using a bunch of hex screws, or occasionally Philips, mostly with the help of blue loctite. Screws can be loosened reasonably easily. InMotion even have a disassembly video. It doesn’t cover everything, but it’s helpful enough.

What I had to replace was a broken upper calf pad, which consists of a hard shell mated with a thick layer of rubber. Luckily, it isn’t at all structural, so while the other side also cracked at the base, I’m content with leaving it that way. 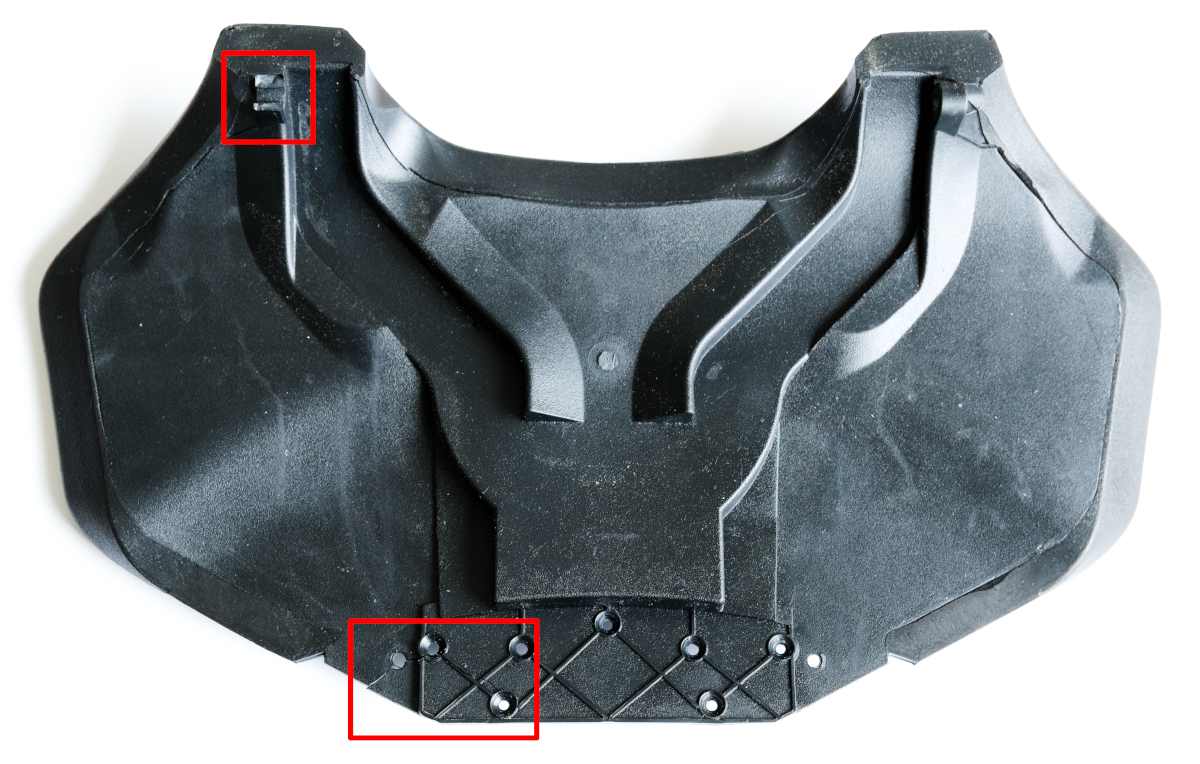 Then there was the more serious issue—​the magnesium alloy suspension-balancing frame cracked in two places: around one of the two screws that used to attach the pad, as well as on the opposite side of that: 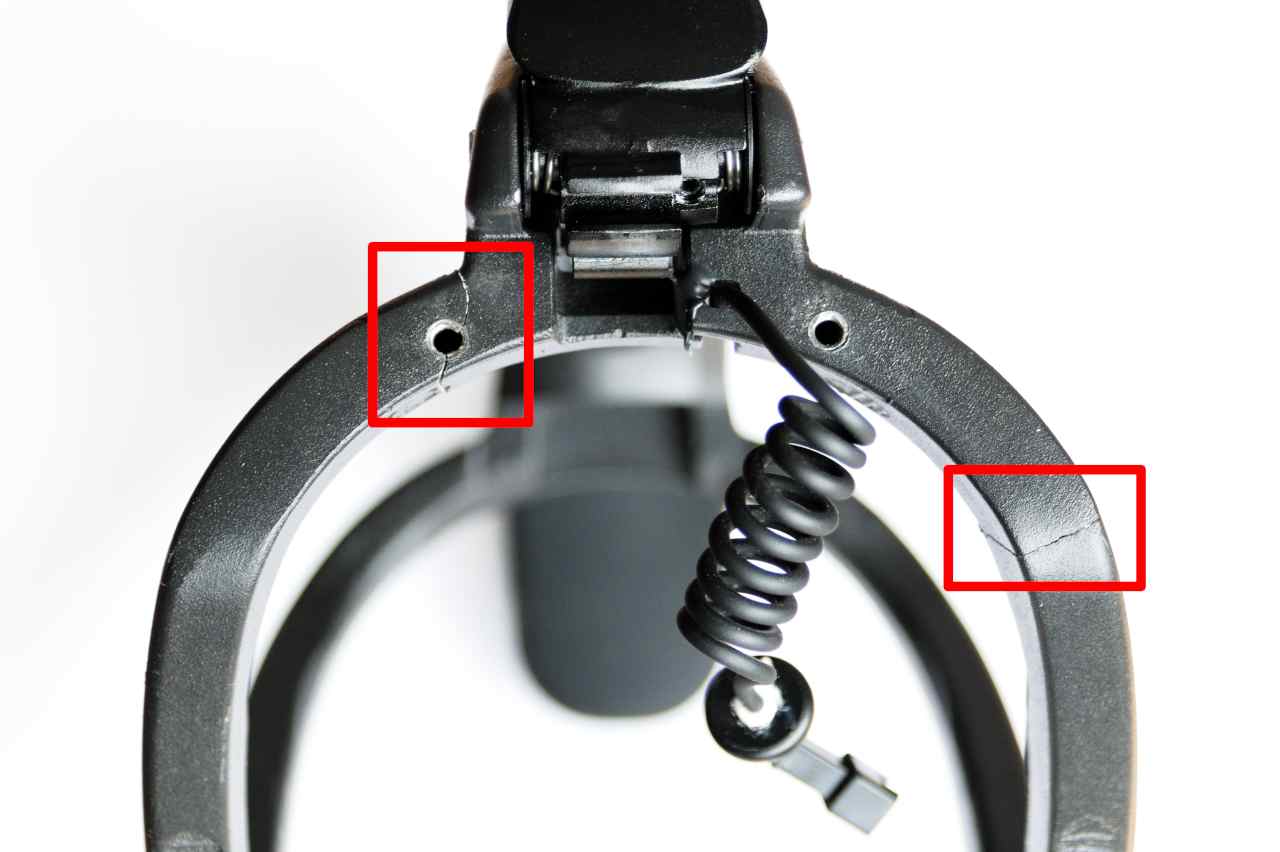 The lift cut-off switch cable doesn’t particularly want to be taken out, and I stripped one side of its grommet. I’m not sure how to properly reseal that one—​perhaps with some kind of a flat O-ring—​or how much I should even care. Note that the silicone in the frame doesn’t particularly need reapplying, there is a pinch point.

The trolley assembly may look intimidating to take apart, but the rods are held in place with grub screws—​the same way as they are in pedals. You should be able to push them out with a hex key and a hammer, perhaps with some WD-40 (but replace it with a better lube afterwards). On reassembly, you can use the larger pin to push in the smaller one. Springs don’t pose major issues.

Buyer beware: a ‘European warehouse’ means little on AliExpress, Chinks are likely to send goods to you directly from China. In one case, I had to pay VAT myself (though not the full amount). The store I’ve had this experience with was roughly by the same amount cheaper than their competition, though, making their lying almost excusable.

While I was shopping, I also ordered original InMotion honeycombs. Here came issues. First off, I’ve noticed that they, for some reason, ship them with screws that have dried-up loctite pre-applied—​this cannot really work, since loctite is glue, not teflon tape. Moreover, I was utterly unable to extract the rods holding the original pedals in place. I suspect that they’ve bent from hard drops. Rather than risk destruction, I ordered a new set of ‘pedal arms’, so that I can swap the entire unit. These arrived slightly rusted, and the assembly squeaks without greasing, but…​ let me tell you, these pedals improve grip like you wouldn’t believe.

InMotion pads are kind-of trash, and certainly inappropriate for the V11—​there isn’t enough surface for it to stick on, and the EUC’s upper calf pads are too soft and irregular in shape to stick to anything stiff. You will get support for acceleration and jumping, but not for breaking. And the upper edge hurts to lean against.

I’ve replaced the layer of double-sided adhesive foil, which can be simply removed by hand, with nearly 3 metres of 3M Dual-Lock reclosable fasteners (6×16 + 2×24 on EUC side, 4×21 + 4×8 on power pads). Trying to remove the adhesive off of the tape with isopropanol actually made it stick to upper calf pads at least a little bit, so I didn’t bother to move on to more serious kinds of glue.

I’ll update this page as I gain more experience.

1. Punny, isn’t it. I was supposed to see it in front of me, but I actually trusted it as if I were blind…​ alright, never mind.