I’ve ordered this 3D printer in the beginning of 2021, after initial successes with having a few models printed out by my friend. Once I put it together, it was amazing to just watch it materialize models from various sources.

Solvespace has turned out to be a very good program for modelling custom objects, after I had to resolve some of its issues, notably accidental slowness. In general, my relationship with this software can be described as love/hate--it is easy to understand, but limited in features, and has erratic export issues when you inevitably manage to break its NURBS mode and have revert to triangle meshes.

I bought a 3Dconnexion SpaceMouse in an attempt to make it easier for me to work in the CAD, but I’ve eventually learnt how to use the mouse with similar ease--you need to press Ctrl/Shift intermittently as appropriate.

Průša Slicer is a fairly good program as well, though it would be nice if it could also command the printer to print over LAN. 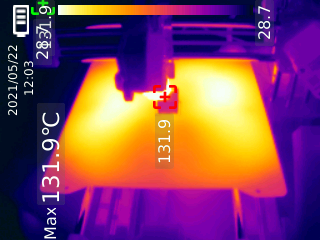 Figure 1. Parts of the heatbed can be about 10 degrees C colder

Roughly around the time when I changed the nozzle to the wider 0.6mm, which is much faster at printing and I’d like to use it as the default, I started getting extruder clicks during retraction, and holes appeared at seams when printing PETG as well as PLA. This has remained the case even after returning back to the standard 0.4mm nozzle.

I tried doing these things to make the problem go away:

I’m also not sure why the idler moved so much during retractions:

Desperate, I ordered the Bondtech extruder and heatbreak, as well as some thermal paste. Someone claimed they’re required upgrades for printing from flexible materials, anyway.

Installation of the extruder wasn’t particularly involved, and the official guide was fairly straight-forward--I just used a little screwdriver rather than a hobby knife for the connector adjustment (do they like cutting themselves?) The hardest step was extracting the input PTFE tube that Průša staff inserted fairly violently into their extruder, and has some scuff marks to show for it.

After that, I was immediately met with the first issue of the alternative extruder: it can’t even load the filament right without the proper E-step setting, as it won’t reach the nozzle. Otherwise…​ it hasn’t quite reached my hopes and expectations, but I’m happy with it. The printer is much quieter now, even doing something as simple as loading the filament, which used to be very loud. However, the clicking isn’t gone yet, it just isn’t nearly as annoying. Retractions still appear to cause issues in prints, and in this aspect I’ve managed to get exactly where I was before.

There is one ugly aspect to this extruder as well: the tensioning screw is quite difficult to set up right, and you have to experiment.

This is one of the remaining things that I haven’t replaced yet. There is still a possibility that the problem is in my current hotend setup. A random old Internet claims that "only the screw part of the heatbreak should be visible", although it doesn’t seem to be the case in official Průša articles. It’s likely I moved some of the stuff there a bit, and maybe I should reapply thermal paste.

I could also try asking the official support if they have any ideas, which I haven’t tried yet. It’d be unpleasant to screw things up more than they already are.

It may be a good idea to get a 1.5 Nm torque wrench they want people to use for the heatbreak replacement, locally e.g. this Yato or for a fancier option our local high-quality Narex, which is sadly much less versatile.

I should also find out where to get replacement PTFE tubes, since they appear to be different here, for some reason.

Work on figuring out the best settings. Notably:

All filaments release measurable volatile organic compounds when printing, as well as nanoparticles, and I plainly felt something wrong with my lungs, even with PLA and PETG. Moreover, I wanted to try ASA, which besides reportedly smelling much more requires stable temperatures. I needed an enclosure.

While thinking about how to go about this, I made a trivial enclosure from an IKEA LACK table and some food wrap. While it prevented dust from falling onto the printer, it was otherwise perfectly useless, what with its impractical size and weight. Also, simply stacking them wouldn’t give me enough room to put things underneath. 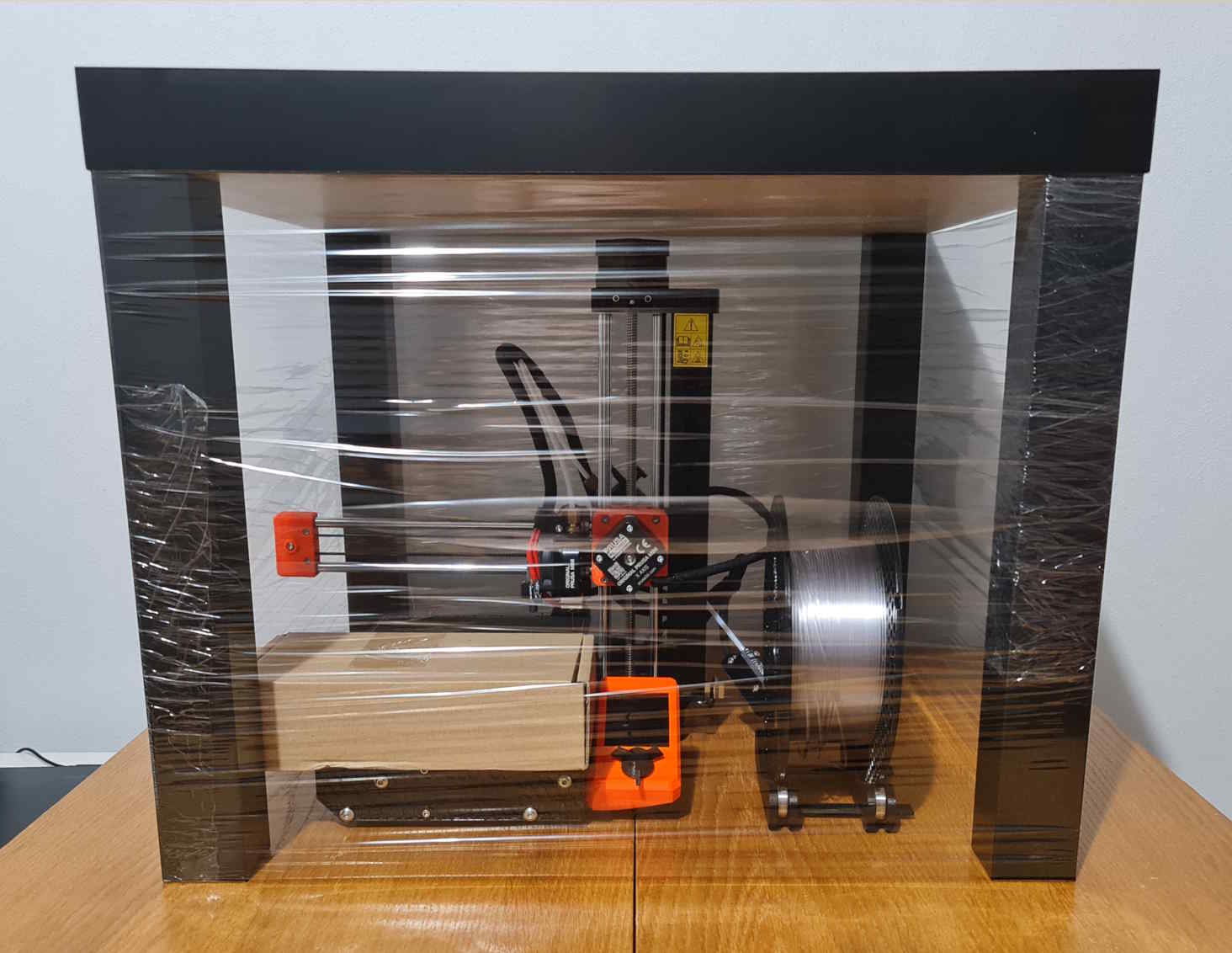 After some research, and looking through the IKEA e-shop, I arrived at the decision to formalize my impromptu ugly stack of things in the form of a PLATSA-based build. And I got it right only due to sheer luck--while the 40 cm high glass door I picked was insufficiently high to cover the whole printer, the drawer front had an alternative, lower groove for the bottom, which enabled me to cover exactly the blank space above it. Very little space is wasted. 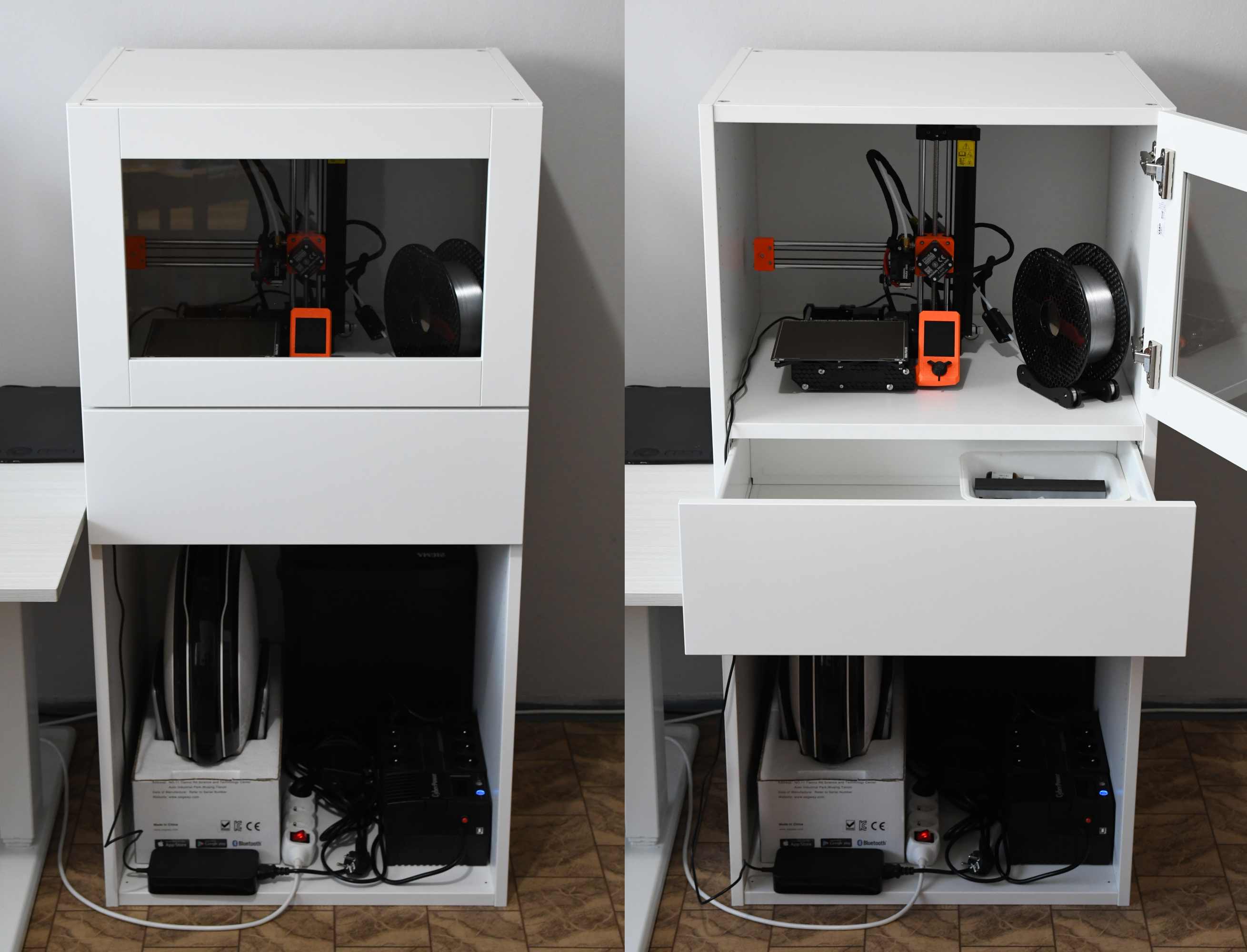 The quality is sadly appropriate for the low price, in that the door had some resolvable issues with closing flush, because the side walls of the assembly warp outwards under load, and the freely hanging shelf is unable to hold them together.

The bottom part is open intentionally, in order to help dissipate heat from power adapters, and charging devices.

I applied some unused foam tape to seal the huge air gaps around the door at least the tiniest bit better--it even looks nicer that way. Similarly, I had to mask the ugly connecting screw holes--for that I used Prusament ASA "Signal White", which is actually just regular boring white and roughly matches the paint on the frame. 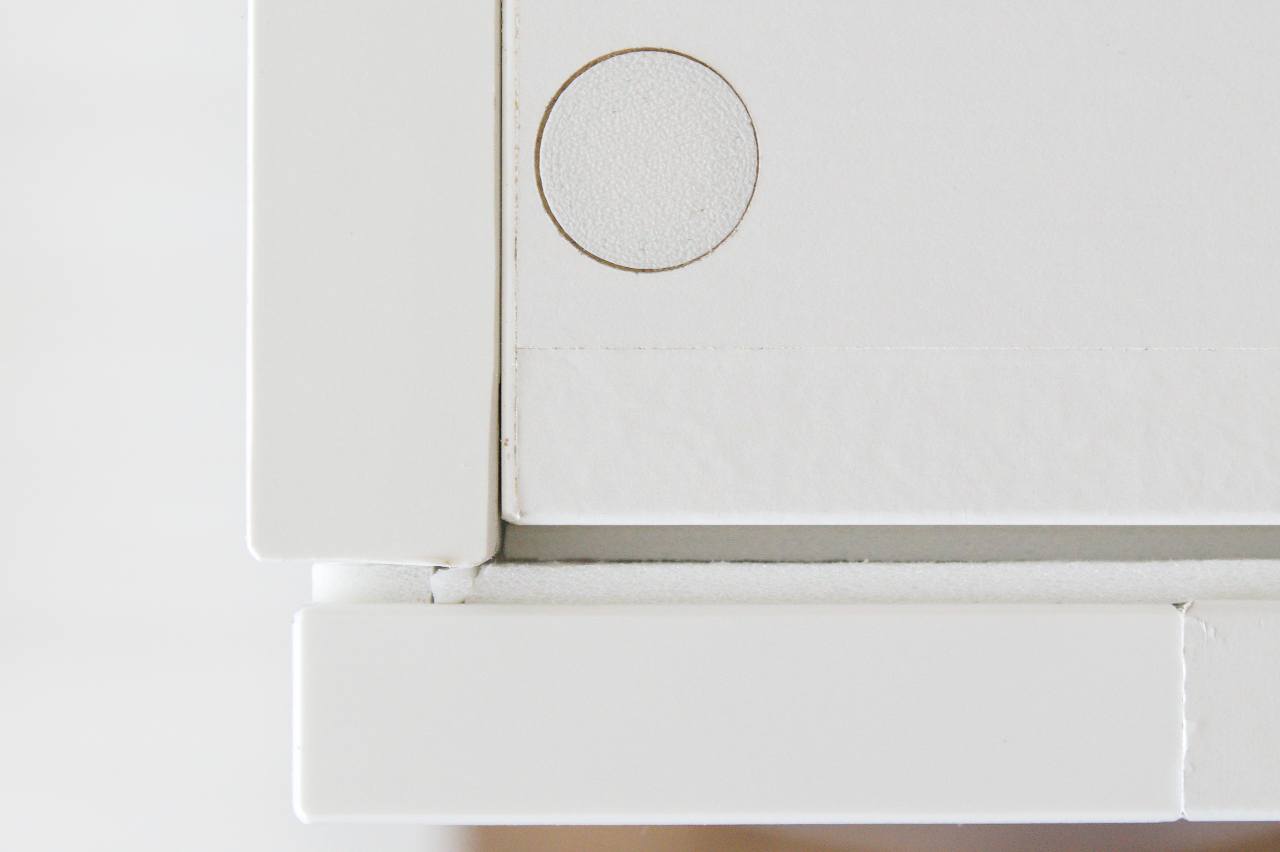 Due to insane resonation levels, I’ve placed the printer on a tile that I cut with a cheap cutter to about 51 cm of length (the shelf is 52.5 cm long), supported by a few rather dense felt pads, as felt is known to have good sound insulation properties. Originally, with stock Průša feet, there were exactly 2 cm of vertical space left above the Z axis stepper motor--the padded tile reduced that to 8 mm, which is rather acceptable. (Note that the Z axis will be slightly limited in movement, as the PTFE tube and cable bundle will start to bend at the height of about 130.) As for the practical results of this exercise, purely subjectively judging, it seems to have helped, reducing the direct transfer of vibrations a great deal. More empirically, when printing with the glass door closed, I measured 52 dBA max just outside of it.

There is also a 50 cm USB 2 extension cable now (theoretical maximum 60 MiB/s, therefore more than sufficient for G-code), since trying to find the hole was fairly anoying even without the enclosure, and the keyring tended to make noise. 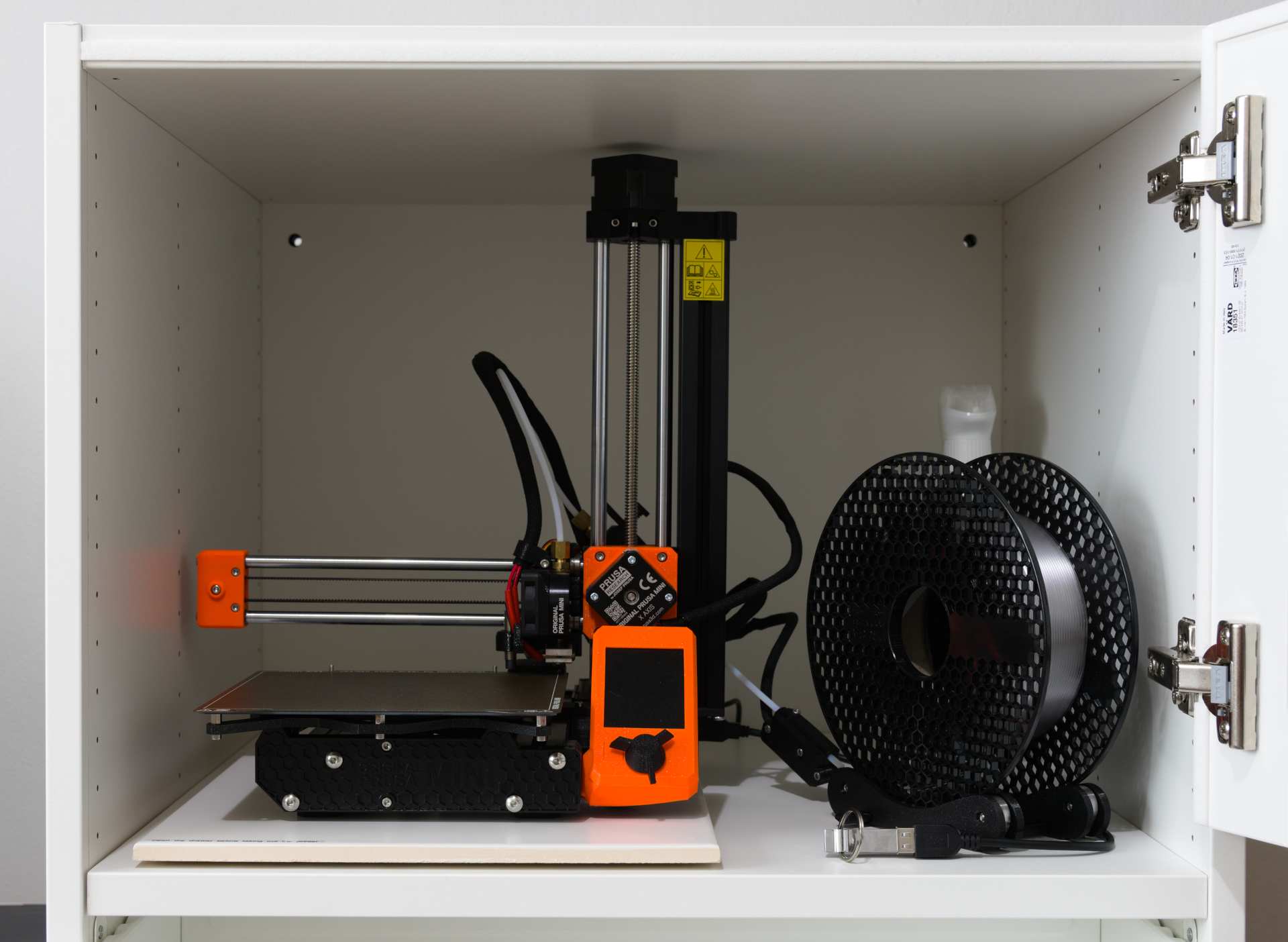 To tidy up the cabling, I used a hole saw to make a ø 5 cm hole in the back for my UPS’s power cable, though ø 45 mm would have more than sufficed. Power plugs are less than ø 40 mm. To make the slightly botched opening look nice, even though it stays hidden at all times, I’ve printed a perfect bushing: 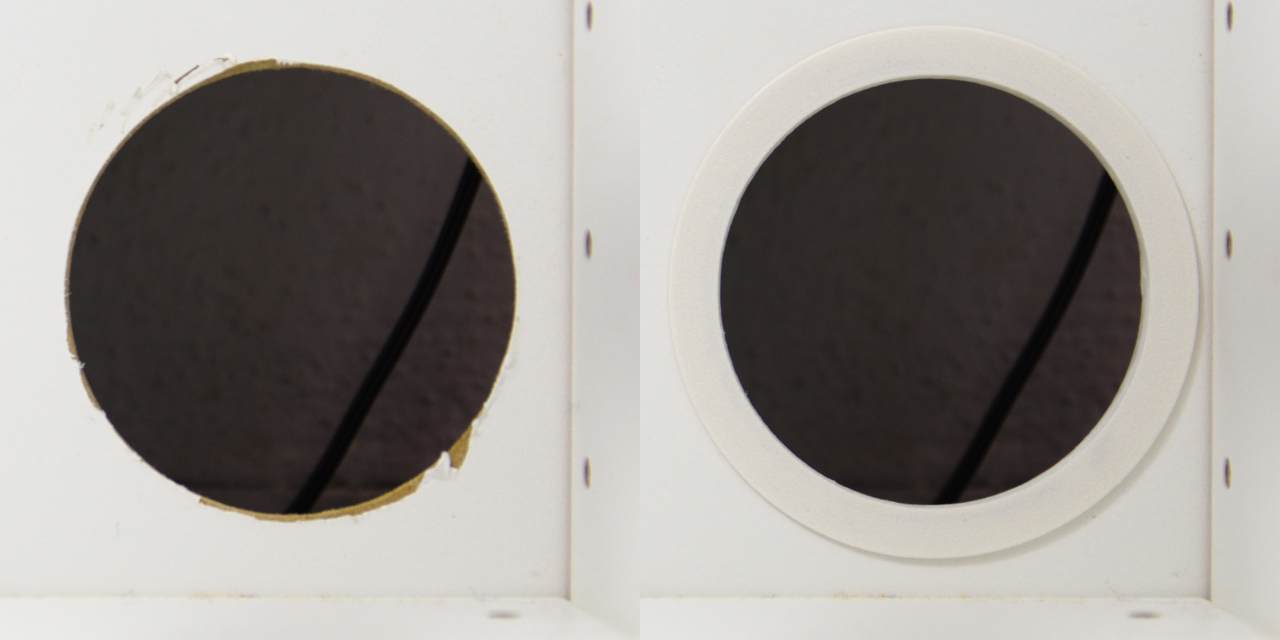 The back flexes, and there is 16 mm of space to put some support in, ideally rectangular or circular. One could even make a thread on a rod, insert a bolt in a side of the frame (needs to be close to the outer surface), hold the rod in a free-to-spin mount on the other side (need to make a small part of the rod a smaller diameter, may use a drill and a file), and squeeze the sides together. This exists. Another similar option: fix a pipe to one side, and screw a bolt into it from the other side. Both possible, but difficult. The simplest thing I can do is glue a flat bar to the back, or maybe a stronger one--the length is apparent from surrounding grooves, about 56.3--56.4 mm.

Once I get rid of the flexing, I’ll have to make the printer’s power cable go through the middle of the shelf (drill bits don’t work, use a jigsaw). I’d also like to connect the printer to the network again, however useless that is.

I might want to replace the noisy CyberPower UPS with something better, or even a basic surge protector, though seeing as prints can take a long time to finish, I’m inclined to have that battery in there. Both will fit comfortably.

I’d like to add some LED lighting, and maybe a temperature and humidity sensor with a display (or see how responsive analogue ones are). I could finally make use of my MSP430 dev board, and get sensors from Aliexpress.

Air filter inspiration: 1, 2, 3. People claim something as relatively simple as a HEPA + carbon filter even on low fan speeds gets rid of ABS odours, so there’s probably no need to overengineer. HEPA-rated filters can be most easily obtained for vacuum cleaners (1, 2, 3, 4, 5). Active carbon can simply be bought in pellets. A large and powerful fan is approprate (1, 2, 3). PWM fan control would be possible. I definitely need temperature regulation and ventilation for longer ASA prints, not only to avoid damage to the printer, but also to prevent spools themselves from getting too hot.

Any controls shouldn’t be put it in there with the printer. I can screw into the premade holes in the side, below the drawer. Print a case using my signal white ASA filament.

In short, this is a time sink, though the experience should be valuable.

Future: Things to try out

Use e-mail or webchat. I'll also pick up on new Hacker News, Lobsters, and Reddit posts.